Utilities are off. Windows are broken and rain and snow has been making its way
into the home for sometime now. The property is located in the city and still wildlife has been able to claim portions of the property as their own home. Winter time can be a grey time of year in New England where some days we don’t even see the sun. Along with days with shorter daylight hours, some days are just glum and grey. Entering a property that has been abandoned definitely doesn’t provide any sunshine to the day. 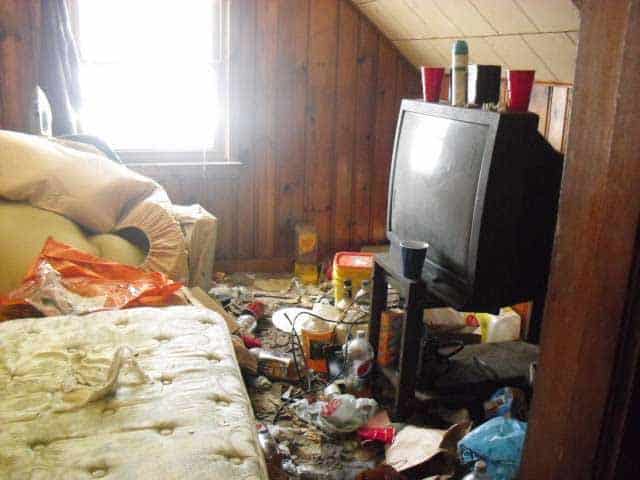 an inspection on an abandoned property is a mixture of feelings. Your senses are heightened to levels that rival a comic book superhero and it’s as if every insignificant sound within the house can be heard. Odors in the distance can now be sensed. Trying to identify the sounds and the odors while peering through each room with a flashlight on a cloudy winter day sets you more alert than the coffee you had that morning which makes you wonder why even bother with the coffee?

Walking through a property with that alertness while also seeing some family’s leftover belonging has always left REO properties more memorable in my mind. It’s not because I want to remember a dilapidated property but perhaps it’s because my brain is on high alert and does a better job at recording the memory.

Often times there’s many personal effects left behind. Old trophies collecting dust on a bookshelf alongside family pictures that were left behind. The sofa where the family gathered is still here. What happened to the family is a question that always comes to mind? Did a family member pass away? Did someone lose their job? It’s not my business but it’s hard to go through an abandoned property and completing the inspection without thinking what happened here. 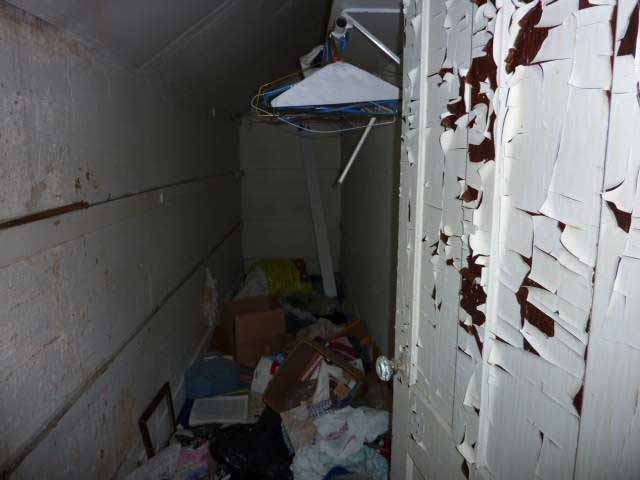 Here is a house that has the ghost of memories left behind. Furniture, toys and debris left on the floor. A place once called home and a place where warmth and love once existed. Now frigid cold and with a subtle breeze from an open window, it feels like the love within the house has been completely sucked away into the vapid climate of a New England winter day. If homes have a soul, then the abandoned property is a dead soul waiting to be exhumed by the next buyer. Likely to be an investor, the buyer will resuscitate the property and another family can start anew.

Under the layers of paint however into the bones of the home, the sounds of kids once likely reverberated throughout this property. Sounds of mom and dad yelling to “slow down”, or “no running” are likely recorded in the beams of the home which are now visible from behind the broken lath and plaster. The sound waves of the family dog barking at the mailman were likely softened by these walls. Do these walls still hold the sounds and memories? With the old family photos still on the wall, i swear I can almost hear a typical day in this house. 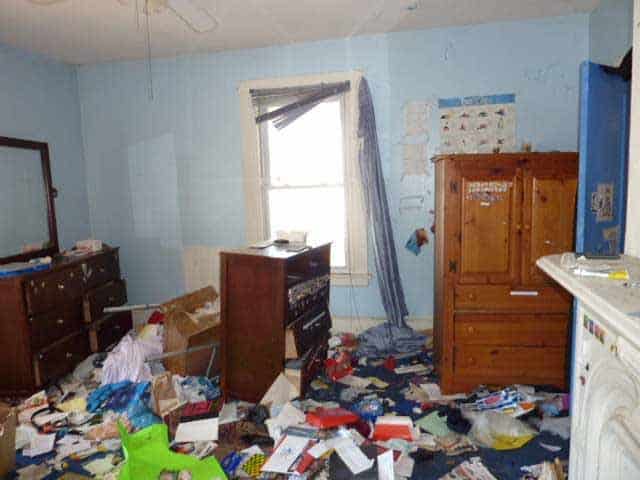 The basement has an original asbestos-wrapped Arco boiler. With impressive endurance, this boiler has heated this property for over a hundred years and likely will be stripped away and replaced with a high efficiency unit. Engineered obsolescence is coming to mind now. Why don’t things last like they once did?

Dodging the spiderwebs and mired in the left over debris, I think about Robert Frost’s poem – “Nothing Gold Can Stay” which was likely written around the same time this house was built. How we just move on in life… is that a sign of strength or insensitivity? Is it neither and is just the way life is supposed to be? With a new facelift, the memories of the prior occupants will be nothing more than an old deed recording. The next family will hopefully big the life and luster this house once held. 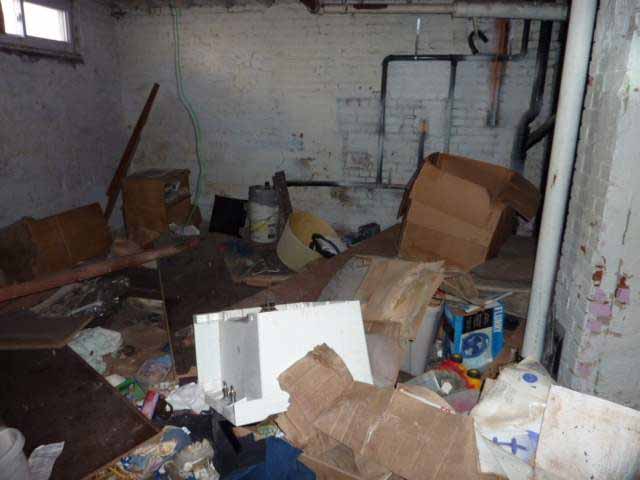 I had left that property forgetting my laser measure. The property and my thoughts had distracted me. It was getting dark and I didn’t want to test my bravery that night by going back to the property. The next day, I went back and i noticed a window next to the door was open. I announced my presence and entered after knocking several times. My heart was racing and attempting to pound through my chest. I went through each abandoned room as I had the night before to look for my laser but it was nowhere to be found. I had suspected someone had taken it. This was the second time I had left a tool behind. While the property didn’t bring an unsuspecting fright from squatting wildlife or from an unexpected occupant, I was angry.

Clearly no ones fault beside my own, I realized how distracted I get with properties that makes me feel uneasy.  This happened previously where the borrower had to be to work and had pushed me through his house. Staying on task and paying attention has to happen or it will continue to cost me money.

While tangential to the story, It’s important to stay safe. This property was fortunately uneventful, but it is important to be aware of your surroundings at all time. Its not just the concern of unexpected guest, but possibly being hurt while working the property. If you are alone who can help you? Read our post on helpful safety tips when completing an inspection on an abandoned property. Also, if you are not already in the habit of doing so, use a checklist on your inspection. Whether it’s a paper checklist or one within your mobile app, having a checklist is important for when a property or borrower throws you off your routine. Another key tip is to tether your tools. Especially if you are an appraiser who’s invested in higher end tools, securing the tools is not only fiscally sensible but can be a time saver as well.

Moral of the story: Try not to let the property or occupant get you flustered and always secure your tools.

Dog Poop Anyone? A Trainee’s Woes

Being directed by your supervisor as a trainee is part of the job. One of my first tasks as a real estate appraiser was to ensure I had photos of the subject from all exterior angles along with photos of all outbuilding, exterior amenities and street views.
This was around the fall season. That doesn’t matter much to the story but I swear I would have noticed fermenting dog poop in the yard if it had been a hot summer day. Anyhow, to cut to the chase, I had unknowingly stepped in a sizable landmine and continued to walk around unaware of my plight.

Entering the property we were greeted by the husband and wife who had (as most homeowners do on refinance orders) cleaned and tidied every room in the house. Now as a trainee, I followed the lead of my supervisor who never asked to take shoes off. I was about half way through the property inspection when I heard the wife exclaim, “Oh my god look at this. There is poop all over the floor!”

It was shortly after that we all discovered that my poop-laden shoe was the culprit. I swiftly took off my shoes and I did the best apology I could come up with but it didn’t seem to quell any of the frustrations the wife had with the situation .

Continuing on with the inspection, in the background the husband is attempting to calm his wife as she is still irate about the poop trail throughout the house. Why hadn’t I noticed it earlier I have no idea? Regardless, hearing the wife continue the tirade about the poop while listening to the husband claim it’s no bid deal while also seeing a visually disappointed supervisor is just a bad start to the day to say the least.

Now it goes without saying that in this situation, you can bet the borrower is going to be extra critical with your report. Why put yourself in this avoidable situation. Should we as appraisers, a guest in someone’s home take off our shoes upon entry? What if they are wearing their shoes inside their home? Is that an unspoken acknowledgement that shoes are allowed inside? How about taking your shoes off? Do your feet smell? Do you have holes in your socks? The bottom line should be is what appears the most professional. Experience has shown that shoe covers or boot covers is the best way to enter a customer / borrower’s home. At the very least, ask the home owner.

Moral of the story: Leave a good impression on the homeowner or occupant. Don’t leave a stinky trail back to your report.